On April 14, 2011, Fast Forward was updated to work as a toggle so players wouldn't have to hold down the mouse any more. Before this update, the player would have to hold down the fast forward button for it to be enabled. As soon as it was un-clicked it was disabled. It should be noted that the iPhone/iPod Touch version of BTD4 always had the fast forward work as a toggle rather than having to be held down. 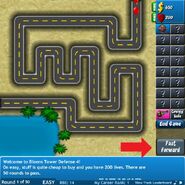 Retrieved from "https://bloons.fandom.com/wiki/Fast_Forward?oldid=267189"
Community content is available under CC-BY-SA unless otherwise noted.