Ezili is a Hero in Bloons Tower Defense 6 who was added in the game in the 7.0 update. She uses dark voodoo magic to attack the bloons. Her attacks act similarly to the Alchemist, except the magic only pops up to 5 bloons at a time and initially only applies damage-over-time to one bloon at a time. Since she attacks with magic, she can't pop Purple Bloons unless in range of an MIB Village. She is the second-cheapest Hero in the game (next to Quincy), costing $510 on Easy, $600 on Medium, $650 on Hard, and $720 on Impoppable. Ezili can be unlocked for

Ezili will start upgrading herself every round upon placement. She earns more XP each round to unlock her next upgrade irrespective of how many bloons she pops. Her upgrades can also be immediately bought with cash, though the amount of cash required to purchase the next upgrade will typically increase as the upgrades get higher, making self-upgrading an important element for her overall power.

Ezili is a hero who is very late-game oriented. As such, she suffers from having a very difficult earlygame and struggles with bloons in midgame. However, during lategame, she really shines as she gains her MOAB Hex ability which allows her to remove huge chunks of dense late game rounds. At the same time, she also has very good blimp damage starting at level 8 and which gets buffed at Level 14. She also helps to reduce superceramic RBE by using her curse to defortify them starting Level 9. Historically, Ezili was singlehandedly the best hero in Freeplay Mode due to her ability to destroy BADs up to very high rounds with MOAB Hex starting Level 20 due to the percentage based nature. Her totem may also be useful for improving the power of your Vengeful True Sun God.

However, Admiral Brickell can do better in Freeplay Mode now, as her Naval Tactic ability can give a boost to all the Temples on the screen including Avatar of the Vengeful Monkey on water surfaces, effectively permanently doubling the total main firepower in late Freeplay Mode, while Ezili's MOAB Hex only lasts for a short amount of time.

No longer strips special properties off of Purple Bloons.

Ezili's leveling up curve now progresses slower to an extent that barely prevents her from naturally reaching Level 20 before Round 100 without enhancements, even if placed on Round 1.

MOAB Hex now jumps to the next-strongest target if the main target is destroyed before the duration expires. The amount of times it can jump is infinite, but duration stays the same.

Level 4 splash AOE no longer centers around her if she destroys the target Bloon in one shot.

Smudge Catt Skin prior to purchase

MOAB Hex on a BAD as Smudge Catt, along with standard attack

Sniper Monkey with Ezili Totem buff icon. Note the huge range of Ezili's Totem
Add a photo to this gallery

MOAB Hex on BAD
Add a photo to this gallery 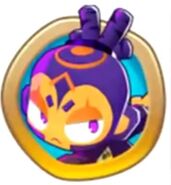 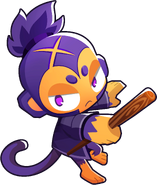 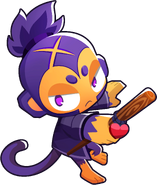 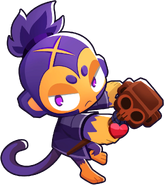 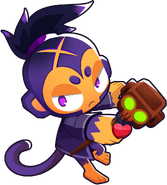 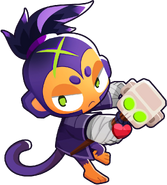 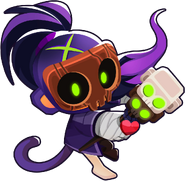 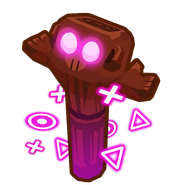 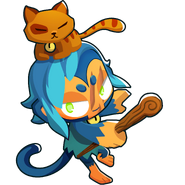 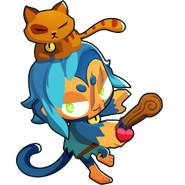 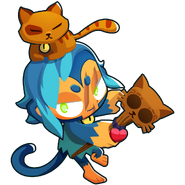 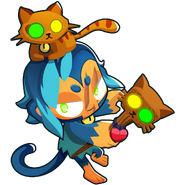 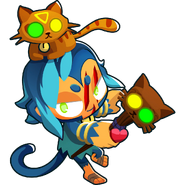 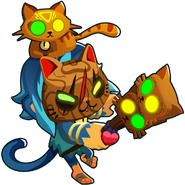 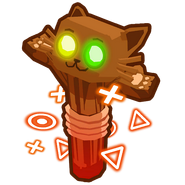 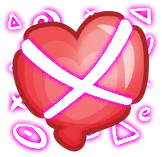 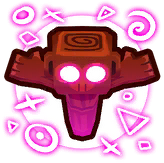 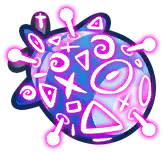 MOAB Hex ability icon
Add a photo to this gallery

Retrieved from "https://bloons.fandom.com/wiki/Ezili?oldid=267188"
Community content is available under CC-BY-SA unless otherwise noted.