Exploding Pineapple is the first upgrade of Path 2 for the Monkey Ace in Bloons TD 6. It allows the Monkey Ace to drop pineapple bombs every two seconds that explode after around three seconds. Each pineapple has 20 pierce with a small blast radius (around 20 blast radius).

Starting from Version 28.0, the Exploding Pineapple upgrade also boosts the power of various explosive attacks from other paths in many different ways. It adds +2 pierce and +4.5 blast radius for all anti-MOAB missiles from Fighter Plane and above, as well as adding +15 pierce and +3 blast radius for Spectre and Flying Fortress bombs.

Exploding Pineapples serves as a source of additional popping power as the Monkey Ace moves around. The greatest downside comes from the 3-second countdown timer of each pineapple, which may lead them missing bloons often. It is not the most reliable source of popping power, but it deals extra popping power nonetheless for a low price.

However, starting from Version 28.0, Exploding Pineapples makes for a viable crosspath as an alternative for other paths. For Fighter Plane and above, grouped blimp popping power is slightly improved, as opposed to higher-pierce darts as Sharper Darts specializes at. For Spectre, it makes the mid-game a fair bit easier to deal with by increasing bomb reliability. While still a very niche upgrade, the Exploding Pineapple upgrade still packs a punch when needed.

While still a situational upgrade, the Exploding Pineapple's pierce has been reduced but now overall attacks faster, which overall can be seen as a buff. In addition, Version 28.0 added crosspathing benefits to this upgrade for any other explosives not along Path 2.

Pineapple placed on a track, before timer shows up

Lots and lots of pineapples on the screen 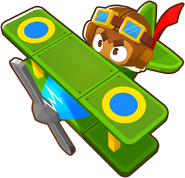 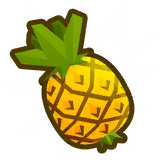