No (requires 5/0/2 for situational purposes)

This upgrade adds two more barrels, for a total of 12.

Shoots 12 tacks instead of 10. Ring of Fire and Inferno Ring with this crosspath gains +1 damage for a total of +2 damage, and adds +300 damage (1000 damage) for the Inferno Ring meteor.

The following is a list of statistics of a Tack Shooter with Even More Tacks. It includes its base statistics and all associated crosspathing interactions. Expand the box on the right to see further information.

The following are a list of wiki-written damage types associated by a Tack Shooter with Even More Tacks. These damage type statistics include how it attacks and how these attacks would affect bloons. Expand the box on the right to see further information.

Mostly modified crosspathing with Ring of Fire and Inferno Ring, removing the special case granting bonus pierce to each flame ring in exchange for bonus damage. 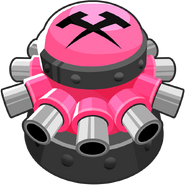 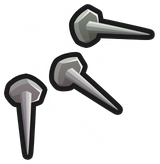