This upgrade adds another black tack to the top of the Tack Shooter, for a four-tack design, up from three from the previous upgrade.

The following is a list of statistics of a Tack Shooter with Even Faster Shooting. It includes its base statistics and all associated crosspathing interactions. Expand the box on the right to see further information.

The following are a list of wiki-written damage types associated by a Tack Shooter with Even Faster Shooting. These damage type statistics include how it attacks and how these attacks would affect bloons. Expand the box on the right to see further information.

This is a great upgrade for improving the overall power of the Tack Shooter. It comes at a relatively low price, so it is good to get this upgrade, especially to improve Faster Shooting. It contains a very significant boost to a Tack Shooter's attack speed, and it is usually the dominant crosspath choice for most Tack Shooter upgrades because of this. 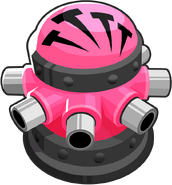 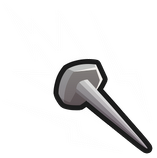