Even Faster Shooting is an upgrade for the Tack Shooter in Bloons Tower Defense 5. It comes after a similar upgrade in path 1 called Faster Shooting. It is the 2nd upgrade of path 1 and makes the tack shooter fire almost twice as fast, therefore making it a worthy upgrade. 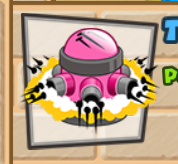 Retrieved from "https://bloons.fandom.com/wiki/Even_Faster_Shooting?oldid=239416"
Community content is available under CC-BY-SA unless otherwise noted.