The Sniper Monkey gains a black bandolier, and the rifle's barrel and stock gain orange stripes. The grey camo beret is changed to an orange camo beret.

As a pure attack speed upgrade, it is the general go-to upgrade crosspath for Path 1 upgrades Deadly Precision and above, as it benefits the Sniper with far superior overall Ceramic popping power (for Deadly Precision) and blimp-stalling (for Maim MOAB) for a rather low price.

Depending on what is desired for the Elite Sniper, this path could be useful for bloon cleanup. The extra attack speed helps generate more shrapnel.

The Even Faster Firing upgrade is still useful for lower upgrades too. When given to a Sniper with Full Metal Jacket, a 1-0-2 Sniper is highly useful for stripping up early bloons between Black Bloons and Rainbow Bloons to make them easier to pop by other towers. When given to a Sniper with Shrapnel Shot, a 0-2-2 Sniper becomes a decent long-ranged spaced bloon cleanup tower. 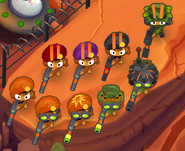 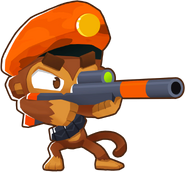 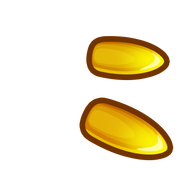