Grants camo detection to all towers on screen (Level 8+)

Etienne is a Hero in Bloons TD 6, released in the Version 20.0 update. He specializes in air-based attacks using drones. He initially has 55 range with his main attack being a ranged attack from his drone. As he levels up, he'll be able to control a greater number of drones, utilizing an increasing number of control patterns for his drones. At Level 8+, he grants camo detection to all towers on screen, like a global Radar Scanner. At Level 10+, a large UCAV (Unmanned Combat Aerial Vehicle) can be summoned with an ability. This ability allows the UCAV to move at a low-flying height while shooting waves of missiles, comparable to a mix between Adora and Spectre, or the Rocket Storm ability. Level 20 modifies the Level 10-19 ability to deal hugely increased damage from the UCAV, while keeping the regular UCAV characteristic of the Level 10 ability active permanently. Note that the Level 20 permanent UCAV is only powerful as the UCAV from the Level 10 ability, discounting UCAV upgrades after Level 10 for the permanent UCAV.

He is unlocked with a one-off purchase of

Etienne's first teaser was a wallpaper image of him operating drones, with a desert-based map behind him faintly in the background. On r/btd6, it was shown here, in turn showing the Twitter teaser for Etienne. The desert-based map was revealed to be Mesa.

Etienne's second teaser, revealing his abilities, can be seen here.

Etienne upgrades automatically after being placed. Unlike most added heroes, levelling speed is 1.0x, the same as all four base heroes (Quincy, Gwendolin, Striker Jones, Obyn Greenfoot). To understand Etienne's targeting system, see Targeting. Additional information is added at subpoints.

When placed on the map:

When a MOAB-class Bloon is destroyed:

When using an activated Ability:

When a Bloon leaks:

Most of Etienne's power comes from the UCAV unlocked at Level 10, as it is extremely powerful to use on various mid to late game rounds and can help save up more money than most other Heroes. At Level 20, Perma-UCAV also gives Etienne decent damage without an ability active.

However, before Level 10, Etienne's earlygame is very weak and is his biggest weakness as his drones have a combination of low stats and inaccurate firing, so always try to pair him with a strategy that can hold itself up till around when Etienne unlocks UCAV. Drone Swarm is still alright to help with some early rounds, but try not to rely on it.

The long cooldown of both abilities means that Etienne's abilities take some effort to manage. Do note that upon reaching Level 20, Perma-UCAV antistalls (i.e. kills straggler bloons quickly, even if undesired), so Etienne strategies cannot use traditional stalling methods and have to either slow and stall the bloons from the next wave or use the abilities earlier to allow it recharge in time for the next time it needs to be used.

Level 3 Etienne with his drone on Mesa

Etienne Level 3 ability with drones towards different bloons on screen 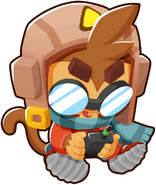 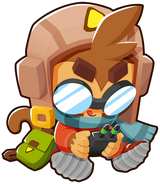 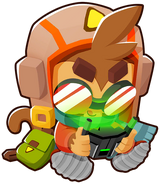 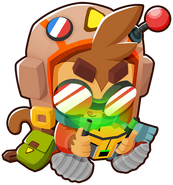 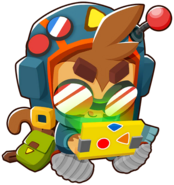 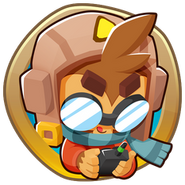 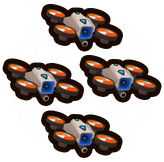 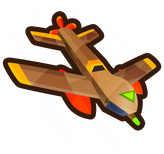 UCAV Icon
Add a photo to this gallery

Retrieved from "https://bloons.fandom.com/wiki/Etienne?oldid=268743"
Community content is available under CC-BY-SA unless otherwise noted.