Enhanced Freeze is the first upgrade of Path 2 for the Ice Monkey in Bloons TD 6. An Ice Monkey with the Enhanced Freeze upgrade receives an attack speed bonus of +33% (every 2.4s to 1.8s by default), and increases freeze duration from 1.5s to 2.2s.

An Ice Monkey with Enhanced Freeze gains a pair of red earmuffs. With Cold Snap and above, it also wears a light black hat overlapping the earmuffs.

Enhanced Freeze produces freezing blasts in a zone-like style. Technically, the Ice Monkey is locked on the Close targeting priority. However, for simplicity reasons, this monkey has no targeting priorities.

Enhanced Freeze improves the effectiveness of the Ice Monkey, patching not only its slow attack speed but improving its freeze duration. Combining the two benefits makes adding the Re-Freeze upgrade very useful for stalling. 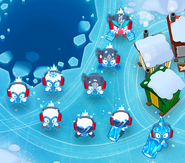 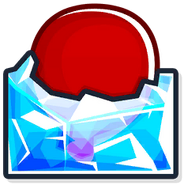