The Dart Monkey's wristbands change from green to red.

Gains another +8 range, for a total of +16 range, and projectiles are thrown 10% faster. Base projectile speed is 330, and its projectile lifespan increases 20%.

Enhanced Eyesight can access Camo Prioritization, allowing all its attacks to prioritize Camo Bloons over other types when this secondary targeting option is active.

The 0-0-2 Dart Monkey is the cheapest camo detection in the entire game and possesses quite high range for its price, at only the cost of $490 on Medium, even cheaper than a 0-0-0 Ninja Monkey. Not only is Enhanced Eyesight useful for early camo rounds, the 0-0-2 Dart Monkey acts as a cost-effective camo range for Advanced Intel Subs.

One minor projectile speed buff to make it more reliable at catching faster Camo Bloons, as well as to make Path 3 crosspathing a little more viable. 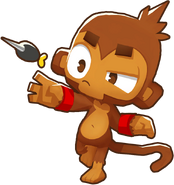 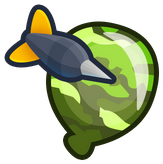