Energizer is the final upgrade of Path 1 for the Monkey Sub in Bloons TD 6. It makes Heroes earn XP 50% faster while in the radius, reduces ability cooldowns of all nearby water monkeys by 50% (doesn't stack with Bloontonium Reactor), as well as reducing ability cooldowns for ALL other towers on screen by 20%. It also increases the pierce of the Bloontonium Reactor attack from 50 to 1000 and the damage from 1 to 5, plus another +5 versus Ceramics.

Energizer is a much larger sub than its predecessor, sporting several neon green-tinted glass windows on its top, as well as Bloontonium-green paint on its fins. The radiation symbol on its front now glows green.

Notably, it possesses a red radiation pulse when given Heat-Tipped Darts, and it sports two guns either side with Twin Guns.

Energizer is a significant improvement over Bloontonium Reactor, dealing 5 damage, 10 to Ceramics, as opposed to only 1, and with 1000 pierce, along with all the unique crosspathing interactions possessed by Reactor, save the +1 lead damage from Heat-Tipped Darts. It retains the ability to decamo Bloons on hit while submerged.

Energizer has the exclusive benefit to grant both additional Hero XP and faster ability cooldowns to all towers on screen. Although quite expensive, it is highly effective in combination with slow-leveling heroes, water-based towers and heroes, and ability-dominant defenses.

It shines mostly in epic late-game, where much of the main power comes from the various abilities in the player's arsenal, most specifically Grand Saboteur, Homeland Defense, multiple Call To Arms, and Overclocks.

However, outside of custom challenges such as 2MPC, "Axis of Subs", and Level 20 Churchill CHIMPS challenges, its limited niche makes Energizer a less popular option on CHIMPS Mode compared to simply affording additional defense for a similar cost. Energizer is still fairly usable otherwise, and it can greatly enhance the player's defenses if relying heavily on activated abilities, especially water-based abilities, while also being providing decent Super Ceramic clean up.

Overall, Energizer is a lot stronger at both popping power and utility compared to when it was first released. It had also gained a sizeable price cut, which is significant in relation to its niche support roles.

Bear in mind that the nerf to no longer applying local bonus cooldown to nearby non-water towers is considered a bug-fix, but is significant enough to be constitute as a balance change and therefore is considered a nerf.

5-2-0 Energizer popping Leads. Strangely, there is no +1 Lead damage for this upgrade. 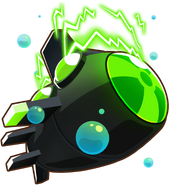