Encrypted is an Intermediate Map in Bloons TD 6 released on Version 21.0 on 14th October 2020. It was first teased on Twitter.

Encrypted is a ruin-themed map with a Halloween atmosphere. Bloons move from the top and move along alternate lanes towards the middle coinciding lane, and exit from opposite directions on the left and right sides outwards.

In the middle, there is a large altar surrounded by 4 small rectangular altars covered in rocks. Each altar represents 1 of the 4 tower categories and can have its own rocks removed (each of them can be removed for $250 each). Only the corresponding towers can be placed on their corresponding altars. They can fit up to two medium-sized towers or one moderately large tower (e.g. Spike Factory, larger than Boomerang Monkey and similar-sized footprints). Most of these altars purely consist of land, but the military altar has water, which can fit a Monkey Sub or Buccaneer, and a small land portion that can fit a Sniper Monkey or Dartling Gunner. 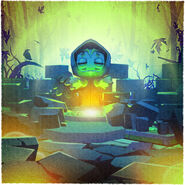 Playing on the Encrypted map, with bloons moving from both ends