Emergency Unlock is an upgrade in the Military Monkey Knowledge Tree that was first introduced on Version 22.0. When at least one Dartling Gunner's targeting is set to Locked, it gives Dartling Gunners a new ability that makes Dartling Gunners that are locked become unlocked instantly, as well as boosting their swivel speed by +33% for a short time, for ~5.0s. Cooldown is approximately 10 seconds, although this cooldown hasn't been formally tested as of present. It does not have a prerequisite Monkey Knowledge requirement. 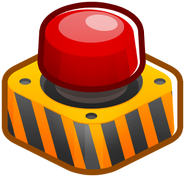 Ability Icon
Add a photo to this gallery

Retrieved from "https://bloons.fandom.com/wiki/Emergency_Unlock?oldid=273902"
Community content is available under CC-BY-SA unless otherwise noted.