Vulnerable Freeze (bloons become frozen but can be hit by sharp objects, +1 damage to all attacks for 2.0s once frozen, strips camo and regrow)
Shardable (while frozen by Ice Monkey, any other tower that destroys the bloon layer will emit spray of 3 shards)

Embrittlement is the fourth upgrade of Path 1 for the Ice Monkey in Bloons TD 6. This upgrade causes bloons frozen by this Ice Monkey to take extra damage from all attacks (+1 damage) for a duration of up to 2.0s, including sharp objects, and for the same duration. Bloons temporarily lose their immunities to attacks that normally cannot pop frozen or lead via the Brittle status (which includes Ice Shards). In addition, this upgrade allows the Ice Monkey to strip off camo and regrow properties from any non-blimp bloon damaged by its freeze attack. MOAB-class bloons can be directly hit too, but only get affected by its damage debuff and brittle effect.

This upgrade changes the Ice Monkey's skin color from blue to red. It replaces the three rhombi decoration with a lightning bolt and two ice shards arranged like eyebrows. Its fists gain an icy texture.

Embrittlement produces freezing blasts in a zone-like style. Technically, the Ice Monkey is locked on the Close targeting priority. However, for simplicity reasons, this monkey has no targeting priorities.

Embrittlement's main role is to weaken groups of bloons or MOAB-class bloons. When placed along a bend, and grouped with many towers, it can help reduce the strength of large groups of bloons, although its rather slow attack speed may cause it to occasionally miss a few bloons. The fact that bloons frozen by the Embrittlement no longer temporarily gain immunity to sharp objects means that it will not hinder nearby towers with the frozen immunity added onto bloons. Embrittlement is also a viable option to countering Camo and/or Regrow rounds, although not the most reliable.

Embrittlement has been buffed to become specialized as a bloon countermeasure.

Embrittlement decamoing and brittling a DDT, allowing Tack Zone to target and damage it 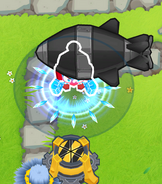 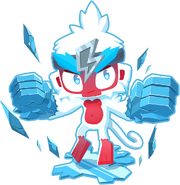 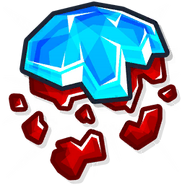