Bloons Wiki
Register
Don't have an account?
Sign In
Advertisement
in: Articles in construction with a WIP, Sniper Monkey, Bloons TD 6,
and 6 more

4 (bullet attack, can bounce to nearby targets)
5 (shrapnels)

Shrapnel Explosion (when fully popped by the Sniper Monkey's bullet in one single shot, the bloon explodes 8 sharp shrapnel pieces)

Elite Sniper is the final upgrade of Path 2 for the Sniper Monkey in Bloons TD 6. It increases the money gained from Supply Drop from $1,200 to $3,000, as well as allowing all Snipers (including itself) to gain a new "Elite" targeting option along with improving attack cooldown for all other snipers by x0.75 (around +33% attack speed), while giving itself a x0.4 attack cooldown (equal to +150% attack speed). The Elite Sniper itself retains its normal Supply Drop Sniper attack but with the built-in faster attack speed.

The Elite Sniper gains a more complex set of goggles, a pair of black gloves, along with a full-black disguise wig. The radio backpack changes from brown and green to entirely black. The black hood loses the orange accents.

This upgrade allows all Snipers (including itself) to gain the Elite targeting setting.

The elite targeting option saves the players from microing too often; when set to elite, Snipers will target Strong Bloons normally and then change targeting to First when bloons are near the exit, specifically once bloons reach at least 75% of the bloon track. Snipers set to Elite will also prioritize Ceramic Bloons over MOAB-Class Bloons.

Because it is an upgrade above Night Vision Goggles, Elite Sniper receives Camo Prioritization, allowing it to prioritize Camo Bloons over other types when active.

Alone, the Elite Sniper offers a marginally high grouped popping power, further improved by giving crosspathing and simple buffs to efficiently counter mid-game grouped bloons across any range. Its main power, however, comes from buffing the attack speed of all other Snipers on screen, as well as its higher value cash crates. Since the Elite Sniper increases the firing speed of all Sniper Monkeys on screen, this upgrade is extremely useful for players with many Sniper Monkeys, especially with Maim MOABs, Cripple MOAB, Full Auto Rifles, and Elite Defender.

On CHIMPS, Elite Sniper is actually a viable option despite not generating income. It handles mid-game rushes with relative ease, improves all Snipers especially 4-2-0 Maim MOABs, and deals rather effective Super Ceramic cleanup when paired with Downdraft. It costs remarkably less than other Tier 5 options, which does give it an edge over other mid-to-late-game options.

Initially considered one of the weaker Tier 5 upgrades in the game, Elite Sniper has evolved to specialize at both combatting mid-game and buffing other Snipers while producing a regular flow of income. Various buffs to this upgrade have been added, enough to make it practical in a CHIMPS game for combatting dense mid-game rounds such as Round 63.

When collecting cash from the Cash Crate:

Two types of crate with the same ability

Elite Sniper clearly targeting on Elite, with Ceramics being targeted over the BFB and first bloons 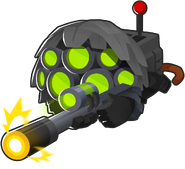 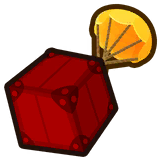