Elite Defender is the Tier 5 upgrade of Path 3 for the Sniper Monkey in Bloons TD 6. It doubles the Sniper Monkey's attack speed, bullets deal much greater damage to MOAB-class, and also allows it to attack 1% faster for every 1% of the track the bloons have reached, up to a maximum of 100%. It also grants a passive ability that allows the Sniper Monkey to attack an additional 4x faster for 7 seconds when a life is lost, for a total of 16x faster compared to a Full Auto Rifle. With maximum internal attack speed boosts, it can attack 195.91x faster than the base Sniper Monkey, or effectively almost 123 shots each second.

The Elite Defender is a monkey with brown pupils and a fully uncovered tail. It carries a grey, wide rifle which has an orange stripe two thirds of the way down, a scope behind the stripe with an orange light, and a square stock. Its mouth is covered by a grill, and its armour is grey around the top of its chest. It has a dark grey camo helmet with black-lined orange goggles. Under the grey part of the armour, the rest is dark grey, with black boots on its feet. Its hands are covered by light grey gloves.

The main strength of Elite Defender is its solo capability against bloons up to later mid-game, even without the life-loss passive ability. It is also one of the cheapest Tier 5 upgrades in the game, and can be very powerful when crosspathed. With Shrapnel Shot, it is a viable option for high-rate grouped damage, although Elite Sniper is generally better for that purpose. With Large Calibre, it has the highest possible DPS of a single Sniper per dollar, particularly evident against MOAB-class bloons.

Elite Defender was considered one of the worst Tier 5 upgrades due to purely relying on an unreliable passive life-loss ability. Version 2.0 increased the attack speed of Elite Defender, making it somewhat more useful, but it was not until Version 11.0 that further attack speed bonuses made this upgrade considered practically usable.

The popularity of Elite Defender was also improved by the buffs to Shrapnel Shot in Version 17.0, making 0-2-5 Elite Defender a usable option in CHIMPS at providing mid-game damage. And while 0-2-5 Elite Defender was used to cheese Deflation, its damage type was nerfed in 28.0 so it can no longer solo all rounds, though a small workaround has been made for this. Version 30.0 gave it extra MOAB-class damage for its main bullet to provide better balance between each crosspath.

0-2-5 Elite Defender with the new Shrapnel Shot rework on Version 17.0 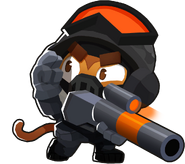 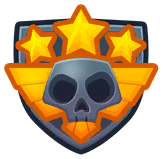