EZ Collect is the first upgrade on path 3 for the Banana Farm in Bloons TD 6. It allows easier collecting of bananas and banana crates by expanding their hitbox. In addition, expired bananas will autocollect for 50%.

When upgraded as a crosspath to Upper Path 2, this upgrade instead highlights Monkey Banks when they are full, including IMF Loans and Monkey-Nomics. The former can be helpful to quickly collect bananas if the player needs money fast or if they are in a difficult spot, but the collecting of bananas is already simple to achieve. The latter can be helpful for providing efficient withdrawals through the use of visual cues but comes with the cost of not being able to crosspath the first two tiers of the first path for the Banana Farm.

Two brown crates are placed on each side of the Banana Farm. This also includes crosspaths with EZ Collect.

As the name suggests, EZ Collect is all about easy collection of income. Allowing bananas to be collected from a further range decreases the amount of manual movement required to collect income. In addition, it provides a cushion of convenience to banana farming, compensating unpicked bananas for a smaller income gain. For Monkey Banks, this allows Banks to visually indicate when they are full, for greater visual convenience, although the leading upgrade after EZ Collect, Banana Salvage, is far more desirable for income convenience purposes.

Although worth keeping in mind to reduce micromanagement, the one major downside of EZ Collect is that it locks out one of the other paths, whether it be the bonus income of Path 1 or the mixed bag of increased banana lifespan and further income generation of Path 2. As such, besides going for Marketplace, EZ Collect in itself remains hardly useful of as a crosspath option.

The autocollect salvage portion is suitable for players who AFK, but it is still more efficient to be picking up the bananas anyway. The greatest downside for the EZ Collect upgrade is that most of the time the superior upgrades for the Banana Farm are Path 1 for the increased income gain and Path 2 for longer banana lifespan and even more income gain, leaving this upgrade usually untouched unless saving for its higher upgrades. Of course, there is also Banana Salvage for secondary perks too, which for a low-cost extra can assist in further autocollection salvages and a better Farm sell price. 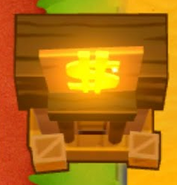 Glowing 0-3-1 Bank, due to special effect from EZ Collect crosspath 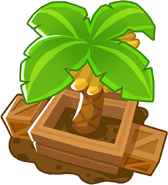 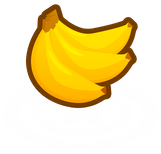