Dungeon Finn is premium character in Bloon Tower Defense Adventure Time. He costs $525 in the game. He is unlockable with a one-off purchase of $9.99 USD or 75000 Crystals in the Martian Games shop.

Dungeon Finn will receive the following permanent boosts as he levels up:

When a MOAB Class bloon gets popped: 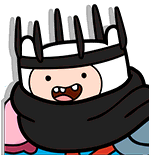 Dungeon Finn
Add a photo to this gallery
Retrieved from "https://bloons.fandom.com/wiki/Dungeon_Finn?oldid=261870"
Community content is available under CC-BY-SA unless otherwise noted.