Start a Wiki
Dry As A Bone is a special mission exclusive to the second city made by the player in Bloons Monkey City. In this mission, the player starts with their original starting cash and two 2/2 Banana Farms placed by the game and has to survive 26 rounds of bloons. Upon completion, the player will receive

No cash will be earned for popping bloons; however, the player can use the Rainstorm ability once per round to create a rainstorm that immediately causes all farms on screen to produce approximately $500+ worth of bananas (per 2/2 farm). (This does not affect the number of bananas generated per round.) The farms can be sold for $0, revealing a small plateau underneath. Selling all farms will disable the Rainstorm ability.

Using 4/2 ninjas under a 2/3 village and a 3/2 ice tower is a good way. Do not put them in the front of the track. put them in the middle. You may also buy a 2/4 spike fact to deal with the M.O.A.B./B.F.B. rushes. Always use the ability and also buy 2/0 farms, if you have enough money, sell the other farms that you buy and buy a 4/2 farm instead.

Be sure to have all Tier-3 upgrades unlocked in your city though, along with all Ninja upgrades, Bomb Shooter's MOAB Assassin ability, along with Sniper Monkey's Supply Drop ability (supply drop ability not vital, but makes a good bonus).

Start off with purchasing another 2/0 Farm. Use Rainstorm ability. Get a 2/2 Ninja. Upgrade it to 3/2 and then 4/2. Then purchase Mortar with Burny Stuff asap. Purchase as many 2/0 Farms on the way and continually use Rainstorm ability as often as possible. Keep purchasing 2/0 Farms until run out of 2/0 Farms. Upgrade to 3/0 Farms, starting with the two 2/2 Farms already provided. Purchase up to 7 3/0 Farms by Round 11. As soon as there are 7 3/0 Farms, start purchasing more 4/2 Ninjas, as well as purchasing a 2/3 Monkey Village.

Then buy more defense as follows. 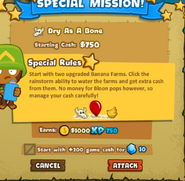 A Dry As A Bone tile.

Initial setup of the Dry As A Bone Special Mission

Dry As A Bone in play

The large numbers of bananas given out from the Rainstorm ability

Start a Discussion Discussions about Dry As A Bone