Druid of the Storm is the 3rd upgrade of the 1st path for the Druid in Bloons TD 6. It allows the Druid to shoot gusts of wind similar to a 3-x Monkey Apprentice is BTD5. These whirlwinds deal no damage but each can blow back up to 30 bloons and are shot every 2.5 seconds. Bloons are blowed back between 100 to 200 track units. Tornadoes move at 90 units per second and last for up to 80 units by default.

Like its predecessor Summon Whirlwind in BTD5, the whirlwinds can remove glue or ice, but they ignore Leads rather than getting absorbed by them.

Level 9+ Obyn Greenfoot increases projectile size of all attacks from Druid of the Storm by +20% and lets them deal +1 MOAB-class damage.

Druid of the Storm is an interesting upgrade for the Druid, adding a gust of wind to push back Bloons to the exit and removes ice and glue on top of its thorn and lightning attacks. This allows for an odd method for combating Bloons by itself, as his short range benefits greatly by having Bloons be forced back and re-enter his range, letting for more attacks by itself to go though before the Bloons exit the range.

What is more commonly used for Druid of the Storm is to be used with the assistance of other towers. With others focusing on MOAB-Class Bloons, the Druid can help to facilitate bloons back to the entrance and buy time for the other towers to either finish off the MOAB-class Bloons first or for taking care of those few that get past the main offensive. Since Bloons are pushed back, harder targets with more layers like Ceramics are a good target to push back.

Compared to the Monkey Apprentice version in BTD5, Druid of the Storm suffers in one area: camo detection. Without the ability to gain a cheap equivalent to Monkey Sense, it requires a secondary tower to strip or cover Camo status. Otherwise, Camo Bloons can slip through without repercussion compared to the Apprentice variant.

Simple price buff, to compete against other blowback options especially Downdraft. Druid of the Storm, in addition to a small price buff, also got a small rework aimed at consistency of its blowback.

Technically, Druid of the Storm also was buffed with changes to Heart of Thunder crosspathing interactions, but it's too insignificant for this upgrade for those changes on the other upgrade to be worth mentioning here. It is, however, affected by the Version 17.0 Heart of Oak interaction buff.

Druid of the Storm as seen in the upgrades menu

Druid of the Storm upgrade icon in upgrades menu 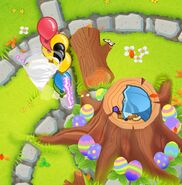 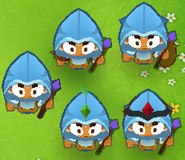 Druid of the Storm with thorn attack, lightning attack, and whirlwind attack simultaneously

Druid of the Storm shooting a whirlwind. 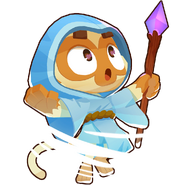 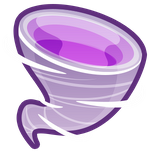