The Druid of the Jungle is the third upgrade of Path 2 of the Druid in Bloons TD 6. It gives the Druid a new vine attack, which appears from the ground and grabs one non-MOAB Bloon anywhere on the map, immobilizing it and draining its layers until fully popped. Once fully popped, an "after-vine" is placed where the bloon was popped. This spiky vine pops any type of bloon, has 2 projectile size and deals 1 per 0.3s contact damage, similar to Wall of Fire, onto up to 30 bloons per contact tick, and lasts up to 4.5 seconds on the bloon track. Spiky vines also degrow bloons thanks to the previous Heart of Oak upgrade.

The vine attack will only be able to attack another Bloon once the original is fully popped. The stronger the target bloon is, the longer it takes to get rid of them. It attacks every 1.4s at minimum, longer if the bloon hasn't yet fully destroyed. Vines are able to target any type of bloon including Lead and Purple Bloons, but not Camo without support.

Level 5+ Obyn Greenfoot also gives +20% range for all Druids of the Jungle and their subsequent upgrades.

Druid of the Jungle wears a green long-sleeve cloak with golden yellow rims at the sleeves. The Druid receives an olive-colored wreath with leaves. Wrapped around the Druid are multiple spiky vines, crossing over the monkey's body diagonally across from each waist and towards each opposing shoulder.

On the upgrade portrait, the Druid of the Jungle appears to be magically interacting with nature using spiritual force. Vines appear to grow upward as a result.

Druid of the Jungle adds a global range vine attack that ignores line-of-sight to the Druid's arsenal. Every 1.4 seconds minimum, the strongest visible bloon on screen up to Ceramic is ensnared and effectively instakilled. A thorny vine is then left on the track for 4.5 seconds, which damages bloons on contact, including Lead and Frozen. The Druid cannot cast another vine until the initial target is fully popped; bloons with more layers take longer to breakdown. The vine attack is locked to Strong targeting and is unaffected by attack speed buffs.

The main virtue of Druid of the Jungle comes from its instakills versus Ceramics via its vines. It is quite slow however, so they are not able to handle too many Ceramics at once. The secondary vines spawned from popped bloons can chip out more damage, similarly to Wall of Fire, but can be unreliable. Overall, it performs strongly on earlier rounds, but falls back greatly once Super Ceramics rise. Their main selling point is their incredible early-game and mid-game popping power, particularly on single-lane maps such as Geared and alternating lane maps such as Bazaar and Bloody Puddles.

Excluding broken bugs such as the Version 8.0 interaction with Striker Jones' Level 9+ (at the time was present-day Level 5+), Druid of the Jungle did not receive any buffs until 28.0. It technically got buffed because of Heart of Oak, but since the main point of Druid of the Jungle comes from the instakill vines, these points are not listed here. 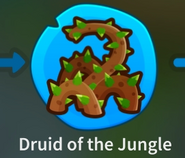 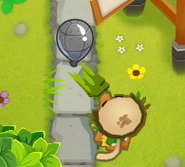 Druid of the Jungle's thorns 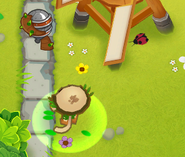 Druid of the Jungle instakilling a Fortified Lead 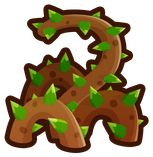 Druid of the Jungle upgrade icon