Druid of Wrath is the third upgrade of Path 3 for the Druid. It allows the Druid to gain attack speed (0.5% more for each unit of damage it does during a round, up to 100%, resets after 2 seconds of being idle) the more bloons it has damaged during the round. This attack speed bonus is stacked multiplicatively with attack speed bonuses from Heart of Vengeance; at maximum attack speed, it reaches 4x attack speed compared to the base tower.

Druid of Wrath is one of the best upgrades in the game when compared to its rather low cost. At the cost of just $1,425 on Medium Difficulty for a 0-0-3 Druid of Wrath, its increasing attack speed mechanic becomes very handy in the defense, particularly when combined with support from Berserker Brew (or Stronger Stimulant), Poplust, Jungle Drums Monkey Village, and Obyn Greenfoot or Gwendolin. Once it gains extra pierce, damage, and attack speed from external sources, it can hugely increase its overall popping power.

In addition to these benefits, Druid of Wrath not only benefits from Obyn Greenfoot's pierce bonuses, but additionally gains one exclusive benefit Obyn provides to all Druids of Wrath on screen. Level 18+ Obyn Greenfoot mentions Druids of Wrath pops starting "each round at 200", meaning that Druids of Wrath by default start at 100% higher attack speed immediately when the round starts until after 2 seconds of being idle.

BTD6 artwork as shown in the upgrades menu 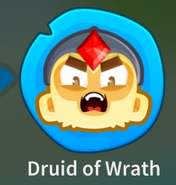 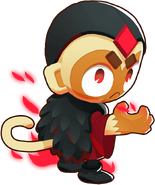