Slow, Boss Bloon, M.O.A.B. Class Bloon, Creates a stone shield around itself, blimp itself made of lead.

Dreadbloon: Armored Behemoth is an Event-only MOAB-Class Bloon found in the Dreadbloon event in Bloons Monkey City. In the battle, Dreadbloon's health is displayed on the top. You do not receive a tile for completing the level. Upon popping Dreadbloon, you will see Dreadbloon saying "Watch your back!" and receive the relative tier of CT Milestone worth in rewards. If you fail to pop Dreadbloon, you will receive a message with the normal "DEFEAT!" showing, and text that says: "...But the Boss is damaged. Chase it down and try again!"

The Dreadbloon appears in a cave level with multiple folds on the track.

Dreadbloon also appears in BTD5 Mobile and Bloons Super Monkey 2 Mobile. The Dreadbloon is the fourth boss in Helium Heights. It appears in the fourth chapter Digging Deep On Level 75.

Dreadbloon's health for any level past level 19 can be determined using the equation below, where "x" is the level to be accounted for (the equation also takes Dreadbloon's shield ramping into account):

4800. The player has 1 hour to defeat the boss otherwise the boss will flee and hide but it will return with full health after defeating another Bloon Beacon tile. 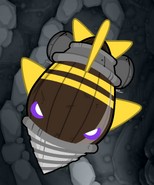 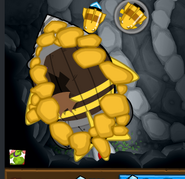 Event in the Monkey News

Next four milestones (last is 20.)

Rewards given from defeating Dreadbloon

Dreadbloon's Sprites from the Mobile version

Option to fight the Dreadbloon in mobile version