In BTD6, this upgrade returns as the third upgrade of Path 2 for the Wizard Monkey. It also shoots out an endless stream of flames at bloons (specifically one flame per 0.1s), but it also creates Walls of Fire and Fireballs, as it is proceeds the other two preceding upgrades. Interestingly, a Wizard Monkey with Dragon's Breath upgrade can now deploy Walls of Fire at a faster rate (per 4.5 seconds as opposed to per 5.5 seconds). It also applies a burn effect like Burny Stuff, dealing 1 layer of damage per 1.5 seconds for 3 seconds. However, Dragon's Breath no longer has automatic Camo detection because Monkey Sense is now a Path 3 upgrade. It costs $3000 on Medium.

0-3-2 Wizards are the preferred crosspath when getting this upgrade. Unfortunately, the flames are neither able to pass through walls or do +1 damage, even with top-path upgrades. Bottom path upgrades, however, increase pierce and grant camo detection correctly, making it superior.

Some upgrade paths have been changed, affecting some upgrade choices.

Dragon's Breath no longer has Monkey Sense by default.

Dragon's Breath now applies a burn Damage Over Time equal to Mortar's Burny Stuff to any Bloon it touches. 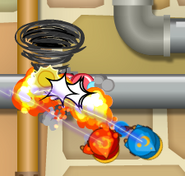 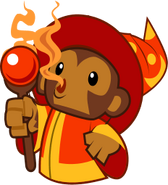 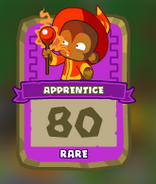 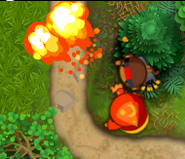 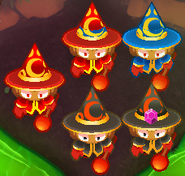 Dragon's Breath new flame as of Version 17.0
Add a photo to this gallery