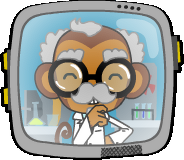 Dr. Monkey is the head scientist of the Monkey Kingdom who debuted in Bloons Super Monkey 2. His purpose in this game is to guide the player throughout the game by giving them helpful tips and making pre-wave comments. His scientific research can be utilized to counteract special bloon immunities and improve powers by purchasing it with Power Blops.

Dr. Monkey can also be unlocked as a playable character in the mobile version of BSM2 once you get at least a bronze medal on all stages and beat Blastapopoulos, the game's final boss, on Stage 100. He can equip all weapon types (including ice and storm) and is immune to bloptonite and bad effects like the bullets of Blastapopoulos.

Dr. Monkey is also a Super Rare ally in Bloons Adventure Time TD, purchaseable for $460 in-game. He can be sharded for 300 shards. When placed, he attacks by throwing flasks of acid at Bloons, similarly to the Alchemist. When bloons are not around, he throws acid onto nearby track, similar to Alchemist's Acid Pool attacks. All of his acid attacks initially deal nothing except remove only Camo and Regrow properties, but can be upgraded to deal more variety of effects to bloons, including damage.

In Bloons Adventure Time TD, Dr. Monkey has a small set of upgrades, much like the other allies in the game.

In Bloons Super Monkey 2 Mobile, he can equip all types of weapons and is immune to bad effects like Bloptonite.

Dr. Monkey as an ally in Bloons Adventure Time TD

Retrieved from "https://bloons.fandom.com/wiki/Dr._Monkey?oldid=259140"
Community content is available under CC-BY-SA unless otherwise noted.