Downdraft sends bloons back between 32 and 300 units distance

Downdraft is the third upgrade of Path 2 for the Heli Pilot in Bloons TD 6. Similarly to its Bloons TD 5 counterpart, Downdraft will regularly blow bloons backwards with its rotors. The blowback effect can be compared to the tornadoes from Druid of the Storm or the effects of Ninja Monkey's Distraction upgrade. Lead Bloons and Frozen Bloons cannot be blown back.

The Heli Pilot will periodically produce bursts of wind that are capable of blowing back up to 1 bloon every 0.15s (every 0.12s with 0-3-2), equivalent to around ~6.67 bloons per second (every ~8.33 with 0-3-2). Blowback distance is between 32 and 300 units. Considering its consistent blowback rate, it is best used against strong non-MOAB-class bloons like Ceramic Bloons (especially against Super Ceramics).

Downdraft gains two additional rotor blades, for 6 total, each with blue stripes, and its wings are now fully blue. The monkey retains the blue cap and green-tinted goggles, but interestingly, in the upgrade portrait it rests them on its forehead, whilst in-game they are over its eyes.

Crosspathing with path 2 adds a yellow or green chevron to each wing.

Downdraft gains a unique Blowback attack that pushes the closest non-MOAB-class Bloon back anywhere from 32 to 300 units every 0.15 seconds.

This attack is affected by Faster Firing, triggering every 0.12 seconds if it is purchased.

Downdraft is the most reliable option for blowback in the game, due to its effective manual control and consistent blowback. While expensive compared to other blowback options, its high controllability makes it an ideal option on any map condition, including the hardest of maps. It sees the most use in late-game runs when used to reduce progress of Super Ceramics from particular areas along the track, particularly in CHIMPS Mode. In addition to simply blowing back progress of Super Ceramics anywhere, Downdraft is a popular and reliable choice for stalling, often paired with 0-1-2 Ice Monkeys for near-infinite stalling.

Because of how cost-efficient and effective its blowback power is compared to other options, Downdraft's blowback rate was nerfed for the non-crosspathed variant to reduce the power of 2-3-0 Downdraft. On the other side, 0-3-2 Downdraft's blowback was buffed overall to reward players for proper Downdraft micromanagement.

Downdraft with the blowback animation on BTD6 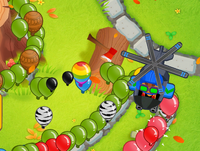 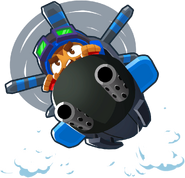 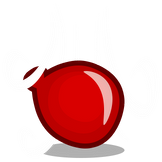