However, unlike BTD5, it is not possible to crosspath a Double Shot with both Distraction and Seeking Shuriken.

The Double Shot Ninja is not a particularly strong tower overall, although with the Seeking Shuriken crosspath it is decent at carrying the early-game before Rainbow Bloons. Its main use is as a stepping stone for Bloonjitsu, or in some scenarios as a purely early-game advancement. Most of the Double Shot's power will come with its crosspaths, each with their own specializations for the Ninja Monkey. And just like Bloonjitsu, a Double Shot Ninja is a good option to pair with Berserker Brew specifically for the extra damage and pierce.

For Path 3, Seeking Shuriken is great for optimize each of its shurikens, allowing the shuriken attacks to essentially deal 2 damage per shot from each 1-damage shuriken, while Caltrops can be added to give the Ninja additional popping power via an additional caltrop attack. For Path 2, Distraction and Counter-Espionage can assist with difficult rounds in the mid-game.

Double Shot did not receive any balance changes since it was first released in BTD6. However, it can no longer have both Distraction and Seeking Shuriken at the same time, as those upgrades are mutually exclusive as crosspaths for this upgrade.

As with all Ninjas, there is a Camo Prioritization target option available that may be useful in niche situations involving Camos. 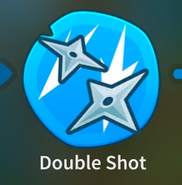 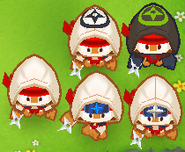 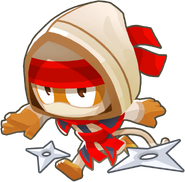 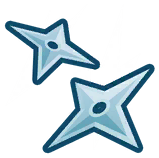