This article is about the upgrade for the Monkey Buccaneer. For other upgrades with the same name (such as Ninja Monkey's), see Double Shot.

Double Shot is the 2nd upgrade on the top path for the Monkey Buccaneer in BTD6. It makes the Monkey Buccaneer's main cannon fire two darts side by side every shot. As of Version 17.0, this affects Grape Shot or Hot Shot too, but not the cannon bombs from Cannon Ship or above.

Double Shot doubles the number of projectiles per shot for the dart and grape attacks. It is a relatively low-cost but reliable option for increasing overall damage output of the Buccaneer, especially when paired with Grape Shot.

Crosspathing interaction added for Grape Shot. But price is increased slightly due to dominance of the Grape Shot crosspath.

Description for Double Shot as of Version 17.0 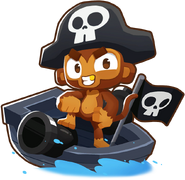