Bloons Wiki
Register
Don't have an account?
Sign In
Advertisement
in: Articles in construction with a WIP, Articles that need more images, Engineer Monkey,
and 6 more

Double Gun sports, well, double guns, each with red lining the end of the barrel, as well as a pair of red earmuffs and golden goggles.

Crosspathing with Path 1 paints the nail guns green, adds a wrench to its back, and then paints said wrench's handle red.

Crosspathing with Path 2 gives it an orange cap with a yellow pencil before swapping it out for a red cap with a white pencil with blue lead and a pink eraser.

Double Gun has all the functionality of Pin with double nail gun attack speed, for an attack cooldown of 0.35 seconds.

Double Gun is an excellent solo for the early-game due its high pierce, decent attack speed, and stalling power via the Pin effect. Again, the Double Gun Engineer does the best along straightaways to maximize its pierce.

So far, there are no buffs for Double Gun itself, as all buffs for this upgrade are just inherited buffs from the previous upgrades and do not make a significant enough difference to be worthy of adding to this Version History log. 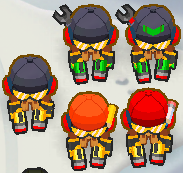 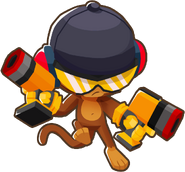