Door Gunner is an upgrade in the Military Monkey Knowledge Tree that was introduced in Version 17.0. It allows the Special Poperations to add another ability that allows it to pick up any tower below Tier 5 for as long as the player wishes until dropped onto a new location. Door Gunner requires Charged Chinooks before unlocking this upgrade. It requires 14 points purchased into the skill tree before speccing into, along with

The Door Gunner ability unlocks for the Special Poperations when the "Door Gunner" MK is unlocked and active. The main function of the Door Gunner ability is to pick up any pickable tower Tier 4 or below (this excludes Heroes too, but can still pick up Banana Farmers) and allow the tower to attack while active. The tower will not be able to change target priority or activate their abilities until transported to a new location, although the picked up tower's ability can still be active while transported via Door Gunner.

When activated, the ability sends the helicopter towards the selected tower and picks it up. Once activated, the tower will continue shooting on their set target priority until transported back to a new location via pressing the Door Gunner ability again.

Certain interactions occur while using Door Gunner. For example, Engineers with any Path 1 upgrade (except with Tier 5 upgrades) will drop their sentries directly below where the Special Poperations Heli is currently hovering at, or to the nearest placeable land spot if the target location is water or otherwise considered unplaceable terrain. Dartling Gunners picked up will point in the direction of where the mouse/pointer is currently at, with the most prominent example being Plasma Accelerator. 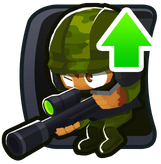 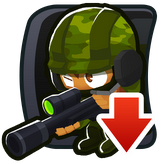 Door Gunner Deploy Ability
Add a photo to this gallery
Retrieved from "https://bloons.fandom.com/wiki/Door_Gunner?oldid=266708"
Community content is available under CC-BY-SA unless otherwise noted.