Not to be confused with a similar Bloons TD 4 upgrade for the Monkey Buccaneer called Battleship.

Destroyer (BTD5) is the third upgrade for the first path for the Monkey Buccaneer. It allows the tower to shoot heavy darts (but not Grapes) five times as fast. This is very useful against large amounts of bloons in the higher levels. They can also spot camo bloons if the player bought Crow's Nest. They fire very fast when attacking multiple targets. The pierce of the heavy darts is higher than that of normal darts, so Destroyer beats Super Monkey in cutting down bloon crowds. It costs $1870 on Easy, $2200 on Medium, $2375 on Hard, and $2640 on Impoppable.

In BTD6, Destroyer returns as the third upgrade of Path 1. See this page for more info.

First of all, the Destroyer gets bigger in size. Now it is equivalent to 3 regular towers. This upgrade adds two extra cannons. One on the right side, and one on the left. The other cannons are squished in a little to make room for the two extra. This upgrade also adds two extra flags. The flags look like the flags that are at the front of the ship. The middle flag and the monkey are squished in to make room for the extra flags. The Destroyer (BTD5) is grey.

BMC icon with change of name

A 2-1 Buccaneer's range. Ignore the towers beside the Buccaneer itself. 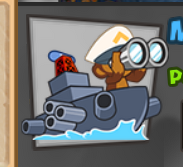