Not to be confused with a similar Bloons TD 4 upgrade for the Monkey Buccaneer called Battleship.

Destroyer is the third upgrade for the first path for the Monkey Buccaneer. It allows the tower to shoot heavy darts (but not Grapes) five times as fast. This is very useful against large amounts of bloons in the higher levels. They can also spot camo bloons if the player bought Crow's Nest. They fire very fast when attacking multiple targets. The pierce of the heavy darts is higher than that of normal darts, so Destroyer beats Super Monkey in cutting down bloon crowds. It costs $1870 on Easy, $2200 on Medium, $2375 on Hard, and $2640 on Impoppable.

In BTD6, Destroyer returns as the third upgrade of Path 1. It will shoot 5x faster than Faster Shooting, firing the main dual-shooting darts (due to the Double Shot upgrade) and grapes (if crosspathed with Path 2) much faster. As with all Buccaneer upgrades, the Destroyer is able to shoot its attacks both forwards and backwards if it detects bloons behind it, not just forwards as in BTD5. The downsides in the BTD6 version of the Destroyer are that Grape Shot and Crow's Nest are no longer purchasable on the same Destroyer, and the price of the Destroyer has increased. The upside, though, is that the Destroyer synergizes well with pierce-boosting towers (especially Alchemist's Berserker Brew). It costs $2950 on Medium.

First of all, the Destroyer gets bigger in size. Now it is equivalent to 3 regular towers. This upgrade adds two extra cannons. One on the right side, and one on the left. The other cannons are squished in a little to make room for the two extra. This upgrade also adds two extra flags. The flags look like the flags that are at the front of the ship. The middle flag and the monkey are squished in to make room for the extra flags. The Destroyer is grey.

Alongside exchanging a metallic pirate ship for a new naval ship, the Monkey Buccaneer becomes a naval sailor instead of a pirate. The new naval ship is equipped with a quarterdeck that carries a blue flag. The color of the flag and the exterior painting of the ship will change color to purple or orange when Grape Shot or Hot Shot are bought, respectively. The color of the barrels will turn golden when Longer Range is bought, while a radar beacon will be installed on the quarterdeck once Crow's Nest is bought. In addition, once Crow's Nest is bought the flag is now yellow with two triangle tips.

Similarly to Merchantmen, the monkey's idle animation occasionally features it checking a compass, and peeking through a hand-held telescope. It costs $2,505 on Easy, $2,950 on Medium, $3,185 on Hard, and $3,540 on Impoppable.

Destroyer with Grape Shot fires twice as many grapes.

BMC icon with change of name

A 2-1 Buccaneer's range. Ignore the towers beside the Buccaneer itself. 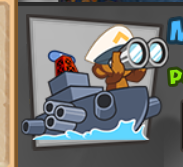 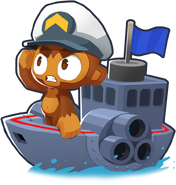 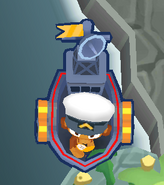 3/0/2 Destroyer looking at a compass, as part of idle animation

Destroyer with Crow's Nest in BTD6

Destroyer with Crow's Nest in BTD6, on an angle

All BTD6 Destroyer crosspaths (Path 2 at top, Path 3 at bottom)
Add a photo to this gallery
Retrieved from "https://bloons.fandom.com/wiki/Destroyer?oldid=243493"
Community content is available under CC-BY-SA unless otherwise noted.