Deflation Mode is a special mode introduced in Bloons TD 4 Expansion and subsequent games, excluding Bloons TD Battles and Bloons Monkey City. In Deflation Mode, the player starts out at round 30 (or 21 in Bloons TD 4 Expansion) with 50,000 money, but every cash generating method (namely popping bloons, completing rounds, Banana Farm, Supply Drop and Cash Injection) is disabled. Upgrades that can modify the value of cash or give more cash, like Monkey Town, Bloon Trap and Support Chinook, will have their cash generating effect negated, although their other effects will still work (if they have any). Selling towers, however, will still refund cash. This Deflation mode shows the icon of a bloon deflating.

This mode can be very challenging, because the player cannot make any more money for the duration of the game. Fast-Track Mode can be activated, but will have no effects on the amount of starting cash or the round number. Saving is allowed in Bloons TD 4 Expansion, and while the game itself won't be saved, it will be saved in the original Bloons TD 4, suffering a glitch. Saving is also allowed in BTD6, just like every other non-Co-Op game mode. Deflation, unlike any other mode, is the only mode that has unlimited rounds. In every game except for Bloons TD 6, the difficulty played is Medium. In BTD6, the difficulty played is Easy.

In Bloons TD 6, Deflation mode is unlocked per-track. To unlock it, The player must beat Primary Monkeys Only (unlocked after beating the standard mode), which will then unlock Deflation. In BTD6, the player is given $20000 (or $20,200 with "More Cash" MK) instead of $50000. Deflation Mode can also be beaten at round 60, awarding a medal and a handful of Monkey Money.

Game Over in Deflation (BTD5) 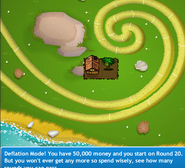 Deflation medal (BTD6)
Add a photo to this gallery