Deep Freeze is the 2nd upgrade of Path 2 for the Ice Tower. It costs $300 on Easy, $350 on Medium, $380 on Hard and $420 on Impoppable. The tower freezes 2 layers of bloons instead of 1 with this upgrade. Despite the description, the tower does not actually do 2 layers of damage. Instead, the description means that the frozen status "soaks through" to the next layer (e.g. a frozen blue bloon will stay frozen even after being popped down to a red bloon.)

This upgrade does the same thing in both BTD5 and BTD6, but it is now after the Enhanced Freeze upgrade instead of being after Permafrost, which is now in a separate upgrade path. 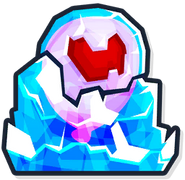 Instamonkey icon for Deep Freeze
Add a photo to this gallery
Retrieved from "https://bloons.fandom.com/wiki/Deep_Freeze?oldid=255224"
Community content is available under CC-BY-SA unless otherwise noted.