Engineers with Deconstruction sport a yellow jacket, red helmet, and a white pencil with blue lead, and a pink eraser. Only the jacket and pencil remain constant when used as a crosspath.

If extra MOAB-class popping power is needed, Deconstruction is the upgrade to get. For a rather low price, adding it with Sentry Gun will improve the Engineer's blimp-popping power by a large margin. This upgrade makes the greatest difference when combating early MOABs.

Deconstruction's value had been adjusted when Larger Service Area got a major price cut, but remained relatively useless until the upgrade's damage bonuses could also be applied to sentries. 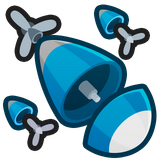