Deadly Spikes is the fourth upgrade of Path 3 for the Spike Factory in BTD6. It allows all spikes of the Spike Factory to pop two layers instead of one layer, effectively doubling its power. It costs $2,975 on Easy, $3,500 on Medium, $3,780 on Hard, and $4,200 on Impoppable.

Deadly Spikes is a very situational upgrade that is best avoided until the Long Life Spikes Spike Factory is affected by relatively low-cost buffs such as Berserker Brew and/or Jungle Drums. The upgrade alone is more expensive than adding an external buff, but there can be a few select occasions where just adding this upgrade can be useful. For example, it can tank leaking Camo Bloons reasonably well, but it cannot solo the Camo Ceramics on Round 51 or the rushes of Camo Rainbows on Round 56.

Deadly Spikes now attacks 4x as fast for the first 2.5s of a round. 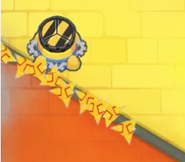 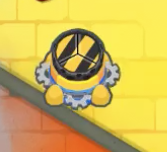 White Hot Deadly Spike
Add a photo to this gallery

Retrieved from "https://bloons.fandom.com/wiki/Deadly_Spikes?oldid=247692"
Community content is available under CC-BY-SA unless otherwise noted.