Deadly Spikes is the Tier 4 upgrade of Path 3 for the Spike Factory in Bloons TD 6. It increases the spikes' damage from one to two, effectively doubling its popping power. Additionally, all spikes now last for 3 rounds instead of 2. Like Long Life Spikes, spikes dispensed from Deadly Spikes last for 140 seconds.

Deadly Spikes causes the Spike Factory to grow taller and noticeably more cylindrical; the area around the port is colored grey, then beneath that yellow, followed by the bottom being blue with a grey band sporting four gears along it. The feet, which remain yellow, extend slightly to reach this band.

The spikes are now roughly cube shaped with four grey spikes sticking out of several faces.

Crosspathing with path 1 adds a red, then grey segmented rim around the port, and White Hot Spikes specifically turns the spike tips yellow with orange lining between each spike.

Crosspathing with path 2 adds two vents above the left and right side gears, as well as painting the feet purple.

Deadly Spikes now carries over up to two round instead of one, and each spike does 2 damage. In effect, spikes last up to 3 rounds or 140 seconds, whichever comes first. The spike carryover benefit has no effect on Apopalypse, but has effect on Boss Bloon Events. Deadly Spikes also has the benefits of Smart Spikes.

Deadly Spikes defaults on Normal targeting priority, which dispenses the spikes onto nearby bloon track in a semi-sporadical behavior. Because it already has Smart Spikes, it will also receive Close, Far, and Smart.

Deadly Spikes is a somewhat situational upgrade whose benefits rely primarily from long-term stalling, and it is prominent compared with Long Life Spikes. This upgrade enhances Spike Factory's stockpiling potential and it is recommended to be used for defensive purposes to maximize its efficiency. Spikes from this factory last in between rounds even longer but their time-based lifespan remains unchanged, meaning that Deadly Spikes eventually reaches its stockpile cap. In combination with the +1 damage bonus, the improved carry-over mechanic helps Deadly Spikes excel in the early-to-mid-game, and mainly when saving for Perma-Spike.

An improperly used Deadly Spikes is poor at simply tanking large amounts of bloons in a short period, especially compared to Spiked Balls which has an opposite purpose; the design of Deadly Spikes encourages stalling for a large stockpile. For example, it can tank leaking Camo Bloons reasonably well, but it will find difficulty beating the Camo Ceramics on Round 51 or the rushes of Camo Rainbows on Round 56 if not enough stalling is done. But, if stalling is done properly, it can easily tank a good chunk of camo bloons if granted external support.

When it comes to synergy for Deadly Spikes, stalling and external buffs are key. Stalling options such as Downdraft and cheap grouped bloon poppers such as Wall of Fire are best in combination with Deadly Spikes. Similarly to Long Life Spikes, Deadly Spikes appreciates external support such as Berserker Brew and Stronger Stimulant, which helps elevate its otherwise generally low pierce and attack speed in addition to gaining a substantial damage bonus.

Deadly Spikes has overall been buffed since it was first released, but only slightly.

Deadly Spikes with and without White Hot Spikes crosspath 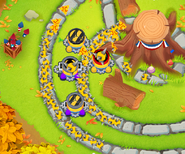 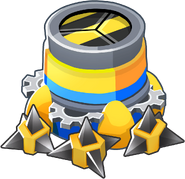 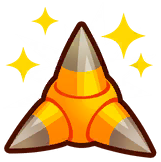