The Dartling Gunner has been released with the 22.0 update to BTD6.

The Dartling Gun shoots darts at wherever the player's mouse cursor is pointing. This and the Heli Pilot are the only towers to date that is controlled by the player's mouse moving. In Bloons Tower Defense 5, this tower costs $1000 on Easy, $1400 on Medium, $2090 on Hard and $9000 on Impoppable.

Hydra Rocket Pods and Bloon Area Denial System rockets will no longer multiply when near a x-1 Village or when activating the Pierce Boost Power. 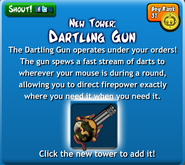 Retrieved from "https://bloons.fandom.com/wiki/Dartling_Gun_(BTD4-BTD5)?oldid=271652"
Community content is available under CC-BY-SA unless otherwise noted.