Dark Knight is the third upgrade on Path 3 for the Super Monkey in Bloons TD 6. It replaces the Super Monkey's darts with dark blades that deal +2 damage to MOAB-class Bloons and can deal extra knockback versus Leads and Ceramics, specifically at -90% speed instead of -60% speed. Additionally, since Version 17.0, it gains a new special ability named "Darkshift" that allows it to teleport to anywhere within its range, with a cooldown of 20 seconds.

The Dark Knight changes from a comic-book hero style outfit to a dark vigilante suit. It gains black gloves. Most of its outfit is black or dark grey, and throws dark blades instead of darts. Its cape loses the dart and circle logo.

Crosspathing with path 1 adds a single-lens set of laser goggles, then swaps them for a three-lens set of plasma goggles.

Crosspathing with path 2 adds 1-2 golden stripes on its head.

Dark Knight retains all the functionality of Ultravision, whilst gaining +2 MOAB damage (for 3) and +4 pierce (for 5) on its attack. It additionally improves lead/ceramic knockback to a 90% slowdown, from 60%.

It also receives the Darkshift ability, which allows it to teleport anywhere within its own range on a 20 second cooldown.

Dark Knight can access Camo Prioritization, allowing all its attacks to prioritize Camo Bloons over other types when this secondary targeting option is active.

Dark Knight is an effective mid-game option at countering MOAB-class bloons and dealing decent cleanup against regular bloons. With the favorable Plasma Blasts crosspath, Dark Knight is effective at taking down MOAB-class bloons at a relatively low cost compared to alternate Tier 3 Super Monkey options, Sun Avatar and Robo Monkey. The additional benefit of Dark Knight is that it comes with an activated ability that allows it to teleport within its direct range, which can come in handy in a handful of tricky situations. Like all Tier 3 Super Monkeys, Dark Knight takes full advantage of Monkey Commerce discounts and pairs well with Obyn Greenfoot and Alchemist buffs.

Dark Knights were a popular option back when BTD6 was first released, due to their high blimp damage potential for low cost. Regardless, Dark Knights were buffed overall in various updates. The non-crosspathed and 0-2-3 crosspath were buffed even greater with the buffs the upgrade itself has received. The added activated ability for teleportation also adds a unique aspect to the Super Monkey that no other Super Monkey upgrade can utilize. Version 28.0 nerfed its Lead and Ceramic slowdown slightly, as many elite players found Dark Knight to be extremely versatile for both the mid-game and late-game, all at a rather low overall cost.

When upgrading or relogging into a game having Dark Knight upgrade:

Dark Knight as seen in the upgrades menu

Four Dark Knights from behind

Teleporting Dark Knight to the left 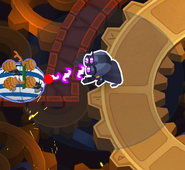 2-0-3 Dark Knight attacking a MOAB, and its range shown 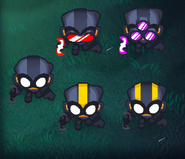 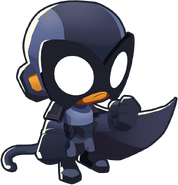 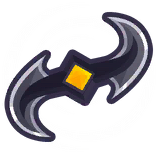 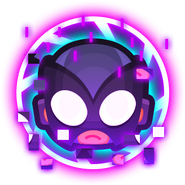