The Dark Dirigible Titan (DDT) is a MOAB-Class Bloon that first debuted in Bloons Monkey City and has subsequently appeared in every Bloons TD game since. With the properties of Camo, Lead, Pink, and Black Bloons, the DDT is immune to Sharp, Explosive, Freeze, and non-Camo detecting attacks. It also moves at the speed of a Pink Bloon, making it one of the fastest enemies in the game. As such, the DDT is considered by many players to be the most dangerous Bloon in BTD.

In BTD6, the DDT first appears on round 90 with 480 health. This is more health than the base MOAB, but less than a BFB. However, the game considers the DDT and fortified DDT to be stronger than fortified ZOMGs and weaker than BADs for target priority considerations. Using a decamo attack such as Submerge and Support will strip its Camouflage. Upon destruction, the DDT will release 4 Camo Regrow Ceramics, making its total RBE 752. If leaked, it will consume 660 lives. It is also the child of the BAD and Bloonarius.

In BMC, the DDT has 300 health and releases 6 Camo Regrow Ceramics. In Bloons Adventure Time TD it moves as fast as a Green Bloon.

It has the appearance of a dark-gray blimp with various black and transparent patches, which resemble its abilities. The DDT has the properties of the Lead, Black, and Camo Bloon (except on BMC Mobile and Steam, where it only has camo properties), being immune to sharp and explosive damage, while also being undetectable by most towers unless they are under the radius of a Monkey Village with Radar Scanner. It is also very fast, being the 4th fastest bloon in the game, and is significantly faster than all other MOAB-Class Bloons.

The combination of immunities makes a DDT difficult to damage, as most of the popular anti-M.O.A.B. towers need Monkey Village support to overcome the DDT's superior abilities. On top of this, in BTD6, it can appear in a Fortified form which first appears in Round 99, doubling its health and making it even stronger. DDTs appear in large groups (usually in groups of 3 in BMC) which can be problematic as they could skim through an improper defense.

DDTs make their first appearance on this game. They will guarantee appear on a tile marked "DDT", but can also appear on Assault tiles (Flash) or Bloon Strategy tiles (Mobile/Steam).

DDTs will naturally only spawn on rounds past Round 80, more specifically Round 90 (Round 88 on ABR). Their children spawn Camo Regrow Super Ceramics when popped. DDTs move at 2.64x the speed of a Red Bloon, slightly more than the speed of a Ceramic Bloon.

They naturally appear in Impoppable and CHIMPS mode, more specifically appearing on Rounds: 90, 93, 95, and 99.

Round 99 has 9 Fortified DDTs appearing in shorter intervals.

The round with the largest amount of DDTs is Round 138, featuring 126 DDTs (of which 81 are Fortified).

Due to their Lead and Black Bloon properties, DDTs cannot be damaged by sharp or explosive attacks without Monkey Intelligence Bureau.

In BMC Mobile and Steam, they don't possess Lead or Black property making them significantly less dangerous outside of their speed and its children.

The best defense against DDTs involves the use of Monkey Intelligence Bureau, the only way to make towers that normally pop only one of Lead or Black to pop both.

The BTD6 iteration of the DDT inherits its immunities from BMC.

As in BMC, the only method to make virtually every upgrade damage DDTs is to use Monkey Intelligence Bureau, assuming that the tower already can hit MOAB-class bloons directly. However, more buffs as well as debuffs exist to also make DDTs more vulnerable to damage. For instance, Acidic Mixture Dip, Gwendolin's Heat-It-Up and Admiral Brickell's Level 5+ abilities give lead-popping. Similarly, Striker Jones Level 5+ grants a 50% chance for any explosives that cannot already damage Black Bloons to deal damage to Black Bloons, including DDTs. DDTs first appear on Round 90, with a particularly dangerous rush of 30 DDTs on Round 95. They also appear on Rounds 93 and 99, with their fortified versions appearing on Round 99.

Some upgrades, such as the Spectre or the projectiles of an Apache Dartship, have projectiles that can pop normal Leads and normal Blacks with two types of projectiles with different damage types, usually darts and bombs. However, DDTs cannot be damaged by darts or bombs without special upgrades. On the other hand, Heroes such as Gwendolin Level 4+ or Level 5+ Striker Jones can temporarily grant DDT-popping power to specific projectile types. Heat it Up temporarily allows sharp projectiles to pop DDTs, while Striker's Level 5 gives explosive projectiles a 50% chance to damage DDTs. However, Level 19+ Striker Jones allows all explosive projectiles to damage DDTs, as the Black Bloon property is completely nullified at that level.

However, most abilities that can hit MOAB-class bloons can affect DDTs, provided that the tower with the ability has Camo detection of some sort. This includes projectiles that normally wouldn't hurt DDTs, with the most significant example being that all bomb-based abilities (including Ground Zero, MOAB Assassin, First Strike Capability) are capable of hurting DDTs without their main attacks being able to pop Black Bloons, although both the MOAB Assassin and MOAB Eliminator abilities require Camo detection to affect DDTs.

Besides towers that cannot affect MOAB-class, the following towers cannot damage DDTs independently, provided they are given Camo detection (or if the DDT has its Camo properties removed):

Similar to BTD6, they have the properties of Camo, Lead, and Black. However, they move at the speed of a Green Bloon, ignoring any added speed modifications. This still makes them the fastest of the MOAB Class Bloons.

Even if its camo property is stripped, it still has the same texture.

There is some debate regarding whether or not the DDT is actually stronger than the ZOMG. Technically, it is stronger than a ZOMG because towers set to prioritize "strong" bloons will shoot DDTs before ZOMGs if both are within range. The ZOMG is stronger in hitpoints than the DDT and is immune and resistant to most abilities like M.O.A.B. Take-Down (while the DDT can be taken down by most abilities), but the DDT has more abilities than the ZOMG. Essentially, what the ZOMG lacks in abilities it makes up for by using brute strength and resilience and what the DDT lacks in strength it makes up for by hybridizing abilities and immunities. It is also worth noting that ZOMGs appear on (most) DDT tiles as well, so it is important to prepare for both.

It is also debatable whether the DDT is actually stronger than the ZOMG Technically, a regular DDT is not stronger, as the ZOMG is targeted first before the DDT However, target settings will generally target Fortified DDTs over ZOMGs in most cases. Certain upgrades may act differently on Dark Dirigible Titans, with a strength spanning from between M.O.A.B. to ZOMG, if not sometimes above ZOMG

In addition to these anomaly interactions with DDTs, DDTs possess additional strengths that may be considered weaker or stronger than ZOMGs. DDTs also contain only 4 ceramic bloons in BTD6, while the number of bloons from a ZOMG can easily overwhelm defenses even if all the MOAB-class layers are popped. Sometimes, a DDT may not be much of a problem until later freeplay rounds, where their speed and health increase due to ramping. As the round number increases, beyond 500, DDTs could outrun other bloons before other towers could attack it in time.

The following are all appearances on each round where DDTs will spawn naturally from the entrance. These will not include the rounds where the DDT's parents or subsequent parents will feature.

, which implies inability to target MOAB-class):

DDTs are significantly weaker on Mobile/Steam than on Flash, as they lack most of their immunities.

These quotes are always triggered upon encountering a DDT. Some quotes from heroes are identical to those for weaker or stronger MOAB-class bloons.

A DDT stuck in Bloonchipper in BMC mobile.

Health stages of the DDT in BTD6 prior to the 8.0 update.

Fortified DDT in Bloons TD 6, prior to the 8.0 update.

The DDT without its Camo. 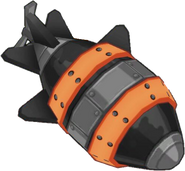 A Fortified DDT in BTD6. 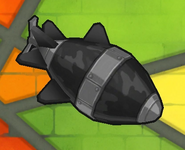 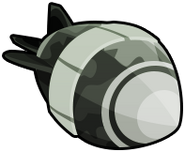 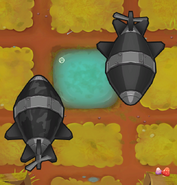 Two DDTs, one with and one without camo, in the current version. 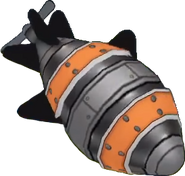 Decamoed DDTs in BTDB2, one with Bloon Boost and one without