Dark Knockback (30% slower against MOAB-class, full halt against Leads and Ceramics, 25% backwards against other bloons)

Dark Champion is the Tier 4 upgrade of Path 3 for the Super Monkey in Bloons TD 6. The Super Monkey now shoots twice as fast as before, alternating from each arm, firing every 0.03s by default, and every 0.015s with Plasma Blasts. These improved dark blades deal much more damage to all bloon types, including Lead and Purple, dealing 2 damage, +3 MOAB-class damage, +2 Ceramic damage, and gaining +4 extra pierce. Additionally, knockback against Leads and Ceramics is -100% speed, unlike Dark Knight's 90% bloon speed reduction.

Additionally, the Dark Knight's Darkshift ability is improved, allowing the Dark Champion to teleport to anywhere on the map, instead of being limited to only within its own range.

Dark Champion adds ear-like protrusions to the monkey's head, and lengthens its cape significantly. The artwork shows it using this lengthened cape to provide itself cover whilst it holds one of its blades at its side.

When actually firing in-game, it visibly throws two blades alternating between each hand. When teleporting, it produces a purple cloud during teleportation and then the Dark Champion appears in the new spot immediately after.

Crosspathing with path 1 gives it laser, then plasma goggles.

Crosspathing with path 2 adds 1 or 2 stripes along its head (with 0-2-4, the stripes run down the ear-like protrusions)

Dark Champion significantly improves Dark Knight's main attack, granting it +1 base damage (for 2, 5 MOAB damage total) and +2 ceramic damage, for 4 total, as well as +4 pierce, for 8 total, and finally, doubling its attack speed (visually represented as two blades thrown per shot) to a 0.03s attack cooldown, (0.15s with Plasma Blasts)

Additionally, its Darkshift can teleport it anywhere on the map, assuming there is space available.

Dark Champion can access Camo Prioritization, allowing all its attacks to prioritize Camo Bloons over other types when this secondary targeting option is active.

The Dark Champion is a high-risk, high-reward upgrade. It strengthens the Super Monkey's stats, improves Darkshift, and excels at popping DDTs, but for an expensive price. While a Dark Champion packs high mobility and a large amount of pierce and damage, particularly DDT-popping power, multiple Dark Knights or a Dark Knight with Permanent Brew tend to have the edge in DPS overall. However, Dark Champion does have various synergies of its own that can give it unique advantages over other options, notable examples being its global mobility and special synergy with Overclock for Tier 4 status.

Dark Champion features as a powerful win condition, having high DPS by virtue of its stats. It also happens to apply Knockback as a decent status effect, and comes with the ability to teleport anywhere on the map for extensive mobility. However, much of this utility falls short due to its weakness against Super Ceramics, having low pierce and easily getting overwhelmed by them. Overall, with the proper support, Dark Champion is powerful, but it must be used with caution.

Dark Champion received a stronger version of the Darkshift ability in Version 17.0, buffing Dark Champion's viability by giving it some mobility. It would later receive indirect bonuses from Dark Knight having reduced lead/ceramic knockback and itself receiving bonus ceramic damage and a bigger pierce increase to help cement its status as a true upgrade, particularly compared to pairing Dark Knight with Permanent Brew.

When relogging into a game having Dark Champion upgrade or above:

A Dark Champion in play.

Dark Champion description as of Version 17.0 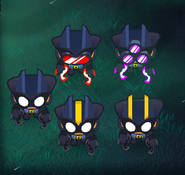 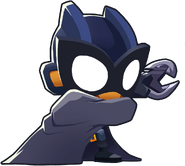 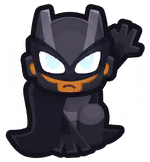 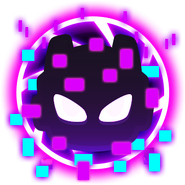