Tribes and Tribulations (version 6.0 and up)
Sunset Samba (version 5.0)

Dark Castle is an Expert Map in Bloons TD 6. It was added on Version 5.0, released on October 23rd 2018, along with the Intermediate Map Haunted and Beginner Map Frozen Over.

The map consists of a dark castle, as the name suggests. Bloons enter from the 4 left ground paths on the grass towards the 1 path castle drawbridge (which closes when the round ends and opens when the round begins). Towers may be placed anywhere along the 2 grassy fields, on top of the castle roof or, in the case of water towers, in the moat around the castle. However, the castle roof walls make the castle roof not ideal for towers affected by Line of Sight, especially Sniper Monkeys, so it's better to use the roof for Banana Farms, Benjamin, or other towers that ignore line of sight (you can also place small towers on the castle wall, which helps towers that shoot in a straight line). 30 trees on the left side of the map also block towers affected by Line of Sight (11 on the top, 6 in the middle and 14 on the bottom with half of 1 of them is offscreen). Each horde of trees can be chopped down for $1000 each.

Monkey Sub on the top-right corner, which is practically useless as an attack tower (except with Advanced Intel.) 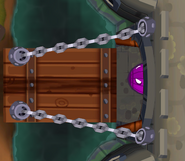 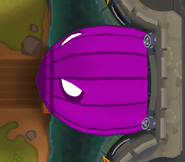 Dark Castle Reverse with an entering BAD with Big Bloon Option (Notice the clipping of BAD on Door Frame).