Cryo Cannon is the third upgrade of Path 3 for the Ice Monkey in Bloons TD 6. Instead of freezing cold radial blasts, the Ice Monkey utilizes an ice cannon that shoots freezing snowballs. Snowballs are shot at every 1.2s (instead of 2.4s) and deal increased damage (from 1 to 2). However, each shot has less pierce (30 instead of 40) and a smaller blast radius (20 blast radius, as opposed to 27 via radial freeze blasts). It possesses significantly greater range, allowing the Ice Monkey to shoot much further away, increasing from 27 to 46.

The Ice Monkey gains grey earmuffs and a grey wristband. Its right hand is replaced with a cannon-like projectile launcher encased in ice. It retains the navy-blue sunglasses and grey gloves gained from Re-Freeze.

An Ice Monkey with Cryo Cannon receives a new idle animation. When idle, the monkey may occasionally scratch their head.

Cryo Cannon receives basic targeting priorities like most other towers do, converting from a zone-based radial attack into a standard straight movement projectile.

Cryo Cannon has a limited niche for freezing bloons that extends its coverage at the cost of less pierce and smaller blast radius. By converting the Ice Monkey's normal radial freeze attacks into projectile-based attacks, it is useful in concept but very limited in practice, and is mainly used for countering Super Ceramics. Besides being a stepping stone for Icicles and Icicle Impale, it can be used as a budget Bloon Impact for defenses that are able to pop Frozen Bloons. In spite of its comparatively lower pierce and blast radius, it attacks considerably faster than Bloon Impact with similar range but much cheaper.

Due to the nature of aim-based projectiles in general, Cryo Cannon naturally performs best along straight lines rather than around curves. Like the popular 0-1-2 Re-Freeze Ice Monkeys, it works the best against Ceramics and Super Ceramics. But due to the reduced pierce and blast radius, the Cryo Cannon upgrade should be reserved in situations where the quick-attacking freeze at long ranges is vital. The higher damage can help in combination with its extensive freeze coverage.

Cryo Cannon overall has been buffed, with a larger blast radius and slightly lower price being the most significant changes for its viability as a projectile-oriented freeze tower. Ninja Kiwi stated in their Version 21.0 balance changes that Cryo Cannon projectiles had too little blast radius in exchange from a close-ranged area-of-effect, and stated their intention to transform it into a hybridized damage + freeze tower.

The buffs given to Cryo Cannon makes it an effective long-ranged "stun" tower, adding competition against other ranged stuns such as Bloon Impact. Alongside previous upgrade price nerfs, its own upgrade price got nerfed too in Version 28.0. 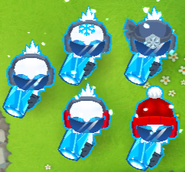 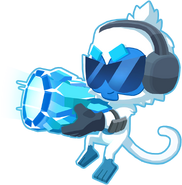 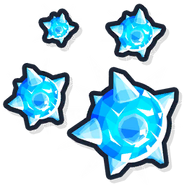