Crow's Nest is the second upgrade of Path 3 for the Monkey Buccaneer in Bloons TD 6. Like previous games, the Crow's Nest upgrade allows the Buccaneer to detect and pop Camo Bloons, in addition to gaining the Camo Prioritization option. Unlike previous games, it now succeeds the Long Range upgrade and is on a separate path from Cannon Ship and Grape Shot.

Purchasing this upgrade adds a crow's nest to the Buccaneer ship. If given to Destroyer or Aircraft Carrier, the ship gets a radar beacon instead.

The Buccaneer sticks its tongue out in the upgrade artwork, similar to the previous upgrade.

Crow's Nest targets bloons using the standard target priorities. Its darts are shot in a straight movement. It can also utilize multiple targeting to shoot projectiles from both ends of the boat if it detects bloons on its opposite side.

With this upgrade, all its attacks can prioritize Camo Bloons over other types, which is provided by the Camo Prioritization targeting.

Crow's Nest allows the Buccaneer to detect camo. While the Crow's Nest upgrade is more expensive compared to other games, a 0-0-2 Buccaneer is valuable as high-ranged camo detector for Advanced Intel Subs on water-heavy maps like Off the Coast or Flooded Valley. Additionally, a 0-1-2 Buccaneer (with Grape Shot) can be used to handle earlier rounds with little trouble.

Both 0-2-2 and 2-0-2 are useful because their subsequent Tier 3 upgrades are readily affordable, whether it be for offense or support. A 2-0-2 Boat can become a camo-detecting Destroyer, while 0-2-2 can become an anti-Camo Cannon Ship or a Merchantman that doubles as a source of income and Camo Lead popping power.

Buffed mostly by the previous upgrade, but in 28.0 there is now the option to target specifically Camos. 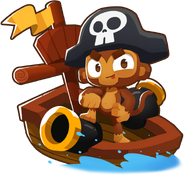