In BTD4, this upgrade allows detection of Camo Bloons for any tower in the radius. It is good for those early rounds with Camo Bloons if players don't have any other tower or upgrade that is able to detect them. In Bloons TD 5, this upgrade only allows the Monkey Buccaneer itself to detect Camo Bloons unless a Tier 3 Pirate Cove is active. In BTD6, it is very similar to BTD5.

In Bloons TD 4, this upgrade is the 2nd upgrade for the Monkey Buccaneer. It costs $130 on Easy, $150 on Medium, and $160 on Hard. Of course, it allows camo detection for the Buccaneer as well.

In Bloons TD 5, this upgrade is the 2nd upgrade of Path 2 for the Monkey Buccaneer. It costs $210 (that or $215) on Easy, $250 on Medium, $270 on Hard, and $300 on Impoppable. Unlike Bloons Tower Defense 4, The Crow's Nest does not give Camo detection to other towers (this is unless the player decides to use the Specialty Building Pirate Cove tier 3).

In BTD6, this upgrade is the 2nd upgrade of Path 3 for the Buccaneer. It is now succeeds the Long Range upgrade and now is on a separate path to Cannon Ship and Grape Shot. Like most other upgrades in BTD5 and later, it only gives the Buccaneer itself camo detection. The Crow's Nest is now also more expensive than it used to be, costing $340 on Easy, $400 on Medium, $430 on Hard, and $500 on Impoppable.

A Monkey Buccaneer with Crow's Nest 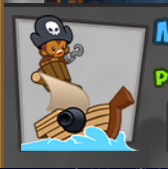 Monkey Buccaneer with Crow's Nest and Hot Shot in BTD6

BTD6 icon
Add a photo to this gallery

Retrieved from "https://bloons.fandom.com/wiki/Crow%27s_Nest?oldid=231844"
Community content is available under CC-BY-SA unless otherwise noted.