Bloons Wiki
Register
Don't have an account?
Sign In
Advertisement
in: Articles in construction with a WIP, Dart Monkey, Bloons TD 6,
and 7 more

Crossbow Master is the fifth and final upgrade of Path 3 for the Dart Monkey in Bloons TD 6. It increases the Dart Monkey's attack speed to every 0.16s (6.25 shots per second), critical hit frequency to 4-8 (with equal chance for any per-shot numbers between this range, inclusive, every 6 shots on average) instead of 8-12 from Sharp Shooter, range to 240% of a 0-0-0 Dart Monkey, and slightly increases projectile speed. It also increases the pierce of each shot to 10, +6 when upgraded with Sharp Shots and +7 on top of that with Razor Sharp Shots. Upgrading to Crossbow Master also allows the Dart Monkey to pop any bloon type, including Lead.

Upgrading to Crossbow Master changes the Sharp Shooter's crossbow design to a black-and-yellow high-tech design. The crossbower now wears a dark yellow visor with a full-black hood and several yellow pockets. It loses its purple wristbands and eyeband, but keeps its quiver from Sharp Shooter. Like most Tier 5s, its appearance is unaffected by crosspaths.

Alongside shooting arrows that deal 6 damage, the Crossbow Master's arrows fires arrows much faster, gains much more pierce, and apply critical hits at a much faster rate. More specifically, it attacks one shot every 0.16s (or 6.25 shots per second), pierces up to 10 bloons per shot, and crits will occur every 4-8 shots. Its range also improves to 76.

Crossbow Master can access Camo Prioritization, allowing all its attacks to prioritize Camo Bloons over other types when this secondary targeting option is active.

Crossbow Master is a well-rounded upgrade that is able to act as a good source of overall DPS. The random critical hits now activate much quicker on top of its much improved attack speed, allowing a few of these critical hits to easily wipe out a decent number of Super Ceramics and shred weaker MOABs. Because of its relatively high pierce and high damage from its frequent random critical hits, it is recommended to place the Crossbow Master along straight lines.

Although the Crossbow Master doesn't necessarily require external buffs in order to perform well, it pairs very well with Overclock in order to increase its powerful random but consistent critical hit rate even more. Although it has only 66% uptime, adding an active Overclock will rapidly improve the Crossbow Master's overall performance by applying critical hits more often, especially versus Super Ceramics. Other useful support towers include Stronger Stimulant, for the increased attack speed to apply critical hits at a faster rate, and Primary Training, to make its projectiles move faster and therefore more accurate.

In addition to being a rather cost-effective Tier 5, there is a Monkey Knowledge Point called "Master Double Cross" that allows for two Crossbow Masters on the map at once, which adds an extra dimension overall power. With this one MK Point, this allows the option to place each Crossbow Master on different areas of the map for even more attack coverage, or they can be placed together in similar locations to produce even more bloon destructive power. In fact, this also makes it easier to get a higher-degree Apex Plasma Master, the Dart Monkey Paragon.

Crossbow Master is currently a lot stronger than it was when it first released. Note that the crosspathing rework in Version 18.0 is considered an overall buff, because it already had a large amount of pierce anyway, and the attack speed buff allows it to activate crits more often. 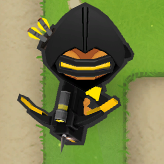 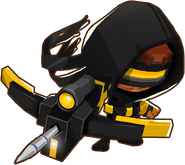 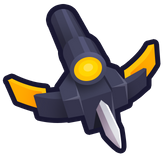 Crossbow Master as seen in the BTD6 menu