This upgrade gives the Dart Monkey a purple eyeband and its wristbands change from red to purple. It gains a crossbow to fire from, and carries a small bandolier of darts.

Crossbows shoot bolts that deal 3 damage and have 3 pierce per shot. The base projectile speed of each bolt is 360, increased from 330.

Crossbow can access Camo Prioritization, allowing all its attacks to prioritize Camo Bloons over other types when this secondary targeting option is active.

Crossbow excels at reducing the strength of stronger early-game bloons into groups of weaker bloons for a remarkably low price. It also has decent pierce and projectile speed. Optimize its high damage potential by setting on Strong and letting it attack along straightaways.

Despite being a very cost-effective middle early-game tower at catching early strong bloons, Crossbow has gained one small projectile speed buff to make it more reliable against catching early Yellows and Pinks.

It was buffed yet again in Version 25.0 that slightly decreases its XP requirements, to encourage newer players to use this upgrade for the effective anti-camo popping power. 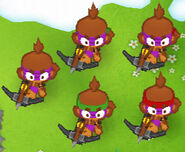 Crossbow in the upgrade menu prior to the Version 25.0 XP buff 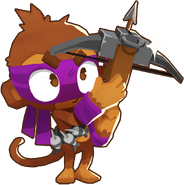