For the BTD5 upgrade of the same name, see Cripple MOAB (BTD5).

Cripple MOAB is the fifth upgrade of Path 1 for the Sniper Monkey in Bloons TD 6. It allows the Sniper Monkey to temporarily stun and cripple MOAB-class Bloons (7.0s for MOABs, 6.0s for BFBs, 3.0s for ZOMGs, 4.0s for DDTs, and 0.75s for BADs and Boss Bloons), causing them to become vulnerable to +5 damage for the stun duration (or debuff duration for BADs and Bosses). It deals 80 damage per hit instead of 30, plus +15 to Ceramics. With Shrapnel Shot, each shrapnel piece deals 12 damage instead of 6 from Maim MOAB, and can apply both stun and debuff.

Cripple MOAB greatly expands the ghillie suit, which now encompasses the entirety of the Sniper Monkey's body, completely obscuring its head in shadow. The rifle is now dark grey with a green camo pattern on the receiver, scope, and barrel.

Cripple MOAB applies a unique visual effect on BADs, seeing as it does not stun them: this effect takes the form of several red Xs.

Cripple MOAB greatly increases the base damage of the Sniper Monkey to 80 instead of 30, and massively improves the stun time, while also inflicting a Debuff on affected MOABs. This debuff causes them to take +5 damage from all attacks for the entire duration. The effects last 7 seconds on MOABs, 6 seconds on BFBs, 3 seconds on ZOMGs, 4 seconds on DDTs, and the debuff, but not the stun, lasts 0.75 seconds on BADs.

As with Maim MOAB, Shrapnel Shot gains the ability to stun and cripple MOABs, and the shrapnel's damage increases to 12 per chunk.

Cripple MOAB specializes at crippling single-target blimps, especially for ZOMGs, BADs, and most particularly Boss Bloons. Its main benefit is not from its increased damage, but from helping other towers apply extra damage to blimps affected by the Cripple MOAB. In combination with towers with high projectile count and high attack speed, affected blimps will become destroyed a lot more quickly. Its infinite range is a major benefit to its overall performance.

Cripple MOAB's main role was to inflict vulnerability for single-target MOAB-class. However, initially dealt very little damage to the blimps themselves, and it did little effect to BADs due to how short they had applied debuff for. Cripple MOAB had been buffed in many updates, with extra damage, lower cost, extra stun time, and 5-2-0 interactions improving its performance in many different ways.

Cripple MOAB, like many other Sniper Monkey upgrades, had received crosspathing changes aimed to discourage exclusively Path 3 crosspathing. For this upgrade, 5-2-0 Cripple MOAB now deals more shrapnel damage and can stun and debuff blimps, making this crosspath viable against grouped blimps. The 5-0-2 crosspath remains superior versus BADs, however, but even this crosspath is now much stronger than when the Cripple MOAB was first released. 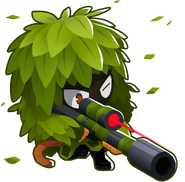