For the BTD6 counterpart functionally, see Maim MOAB.
For the BTD6 upgrade of the same name, see Cripple MOAB (BTD6).

Cripple MOAB is an upgrade for the Sniper Monkey that first appears in BTD5.

In BTD6, this upgrade makes a return, but is now a Tier-5 upgrade that is much more powerful. See this page for more info.

In BTD5, this upgrade is unlocked in Rank 25, provided enough XP is unlocked for the Sniper. In BMC, Cripple MOAB has to be researched through the Gun Training Hall (Flash) or Rifle Training Hall (Mobile), and also requires the Special Building Anti-Materials Gun Lab to be built. 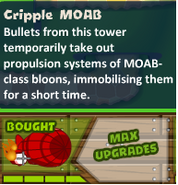 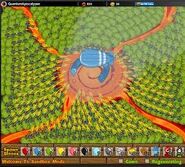 A bunch of Cripple MOABs attacking a M.O.A.B. and some Blue Bloons in Mount Magma

Retrieved from "https://bloons.fandom.com/wiki/Cripple_MOAB_(BTD5)?oldid=269491"
Community content is available under CC-BY-SA unless otherwise noted.