Crash Site is a Special Mission that involves saving a Heli Pilot from bloons. This mission is very similar to the Submarine Alliance mission: Same as the Broken 2/4 Sub, the broken Heli Pilot is at the middle. Paths go towards the Heli Pilot in 2 paths. You can either defend the Heli Pilot or repair it to use as a free tower. Repairing costs $1000, so players can pretty much get it on the first round. The highest bloon rank is the Ceramic Bloon and there are 17 rounds.

I started on Level 14 or 15 (I don't exactly remember the level) and with no extra cash, insta-monkeys or other stuff. This is how I did it:

then i fixed the pilot and upgraded him to 3-2

and then i completely upgraded the engineers

and then i won.

follow what i did, and the heli pilot is yours:

1.) DO NOT fix the heli pilot for the first few rounds, instead, get a dart monkey at both entrances of the track, and make sure to get a sniper to 1/2

2.) continue to place dart monkeys, and ninja monkeys around the heli

3.) get about 3 more snipers, and the heli pilot is now yours!

this worked well for me, i had somewhere around 75-50 lives left...

First get 2 enhanced eyesight triple dart monkeys in the front and back, lets say oh! what are you gonna do with lead? put 1 corrosive glue (or bloon dissolver or if your darn rich), then lets say a regrow ceramic comes place a lightning bolt and monkey sense (just incase) and then repair the heli pilot and get quad dart and downdraft now you are done 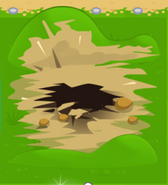 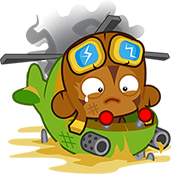